Ssssuck. The sound of my boot extracting from another micro-swamp, as Simon Williamson and I slithered our way up Gable End Ridge. After four or so hours we’d reached the highest section of the ridge. At 900 metres the trees were stunted, permitting glimpses of Waiopehu Hut, nestled a little beneath the apex of the adjacent ridge to the west. It was drissling, adding to the muddy conditions. ‘Worst mud I’ve seen in the Tararuas I reckon’ cursed Simon. ‘Sure hope this doesn’t persist higher up’, I replied. ‘Hopefully once we pass the Te Araroa Trail branch this mud-fest will relent.’ We wouldn’t find out about that until the next day. For now our objective was Te Matawai Hut, perched on a level section of ridge at 900 metres, beyond Butcher Saddle. The saddle required giving up 300 metres of hard-won height and, descending in the muted conditions seemed to accentuate the injustice of the descent. We both knew well that winning the Tararua tops is about persistence, so a couple of hours later we trudged onto the deck of Te Matawai Hut – my first time there, so a reason to revisit hutbagger.co.nz on my return. We’d been stalking Metservice for nearly two months leading up to this trip. The weather had been so unsettled that a window just wouldn’t open for us. But now, just before Christmas, from the deck we enjoyed a striptease act laid on by Lancaster and Pukematawai just to the east of us, as clouds seductively fell away from their naked flanks, indicating that the forecast was coming good. The next two days – when we’d be almost exclusively on the highest of the Tararua tops – would be clear, with a nice touch of southerly air-conditioning.
It was great to be up in the hills just before Christmas, but we felt pangs of guilt. Simon’s partner Caro, as much a hill-lover as us, couldn’t join us due to work commitments, but she’d selflessly dropped us off at the road end just south-east of Levin, and had agreed to collect us again at the Holdsworth Road-end three days later. Her only request - ‘Just don’t brag about it when I see you next.’ Neither Simon nor I had completed a northern crossing of the Tararua Ranges. We’d both done a southern crossing long ago. That route seems to be the best known, but many other trips into the Tararuas since then had revealed to us that this northern route would be even more spectacular. Up the northern end reside virtually all the highest points in these ranges. Of the fifteen points shown on topo maps as at least 1,500 metres high, our route would climb over eight of them. It is entirely feasible to do a northern crossing in just two days of tramping, by heading east over Bannister to Cow Saddle and out to the Kiriwhakapapa Road-end. Indeed, there are several different routes on offer. However, due to the favourable forecast, Simon and I planned to enjoy a tops feast by heading south along the main range, linking Arete with Girdlestone and McGregor. In so doing we would enjoy some of the most spectacular Tararua terrain on offer. On our first evening we shared Te Matawai Hut with three others – all SOBO TA walkers and all, not surprisingly in this Covid world, Kiwis. It was interesting hearing about some of their Te Araroa experiences, yet I remained uninspired. Their route would take them south, just beneath Pukematawai (1,432m) the next morning, leading them down a long bushclad ridge for the most part until they eventually would exit the Tararuas at Otaki Forks. Yet, in my tops-lover opinion, a much better option would be to just hold an easterly course over Pukematawai, thereby encountering what Simon and I were champing at the bit for. Of course, to each their own. 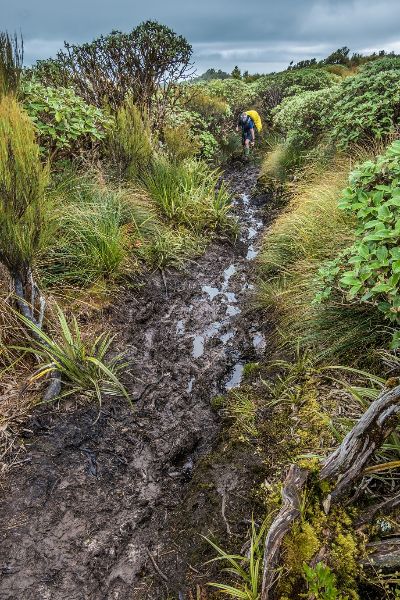 At about 900m on Gable End Ridge
The clouds had all but dissolved as we set off in fresh morning conditions. The mud remained until a little before the TA turn-off, then for the rest of our trip conditions underfoot were surprisingly dry. Soon we were over Pukematawai and making our way along a craggy section of ridge beneath Arete, our first ‘fifteen-hundreder’. Up on Arete the air was crystal clear and the southerly breeze gentle and cooling – perfect Tararua tops conditions. The intimidating bulk of Bannister loomed to our left as we dropped down to Arete Biv for morning tea. I’d been to the biv just once before, having come up over Bannister alone a few years back. My dawn recollections still come to me vividly and the biv became one of my favourite shelters in the Tararua Ranges, along with Maungahuka Hut. On my first visit there I carried on south to Lancaster (my fifteenth ‘fifteen-hundreder’ at the time) and then down Pinnacle Spur. Being alone, the terrain ahead on the spur had appeared foreboding to the extent that I didn’t even register what lay to the south. ‘Whoa! What have we here then?’ Simon was impressed as he stood on top of the northern-most bit of the Waiohine Pinnacles. I had to agree – ‘I’ve never even heard of these guys. They look as impressive as anything else I’ve seen up in these ranges.’ The next 200 or so metres of descent required focus, but at least at their southern end they morphed into the gentle rolling terrain of Tarn Ridge – a geographic Jeckyll and Hyde.
Later we climbed again, up past the memorial and grave site and over a tussocky mound to see Tarn Ridge Hut appear below us. I’d seen this hut from the Brockett/Girdlestone ridge on a previous trip and recall thinking what a lovely spot it appeared to be. This was now confirmed as I took photos from various angles. Nestled just below the ridgeline in a little dip, with Girdlestone towering above to the south-east, the hut commands a superb view north to the Twins and Bannister. The nearby loo has an even better view. It was my first time there, so another reason to revisit hutbagger.co.nz. I was happy to see that the hut was under much needed repair, suffering from quite severe rotting.  Being the only ones there, we enjoyed a peaceful afternoon and I got pretty excited about the sunset, as seen from above the hut, too. We knew we had plenty of work to do next day before we met Caro at the far end. In fact, we had a plan B to drop off down Baldy ridge and exit to the Pines if our aging bodies complained too much. Time would tell as we set off in the direction of Girdlestone under another completely clear morning sky. As we neared the top of Girdlestone, below us on Dorset Ridge a tiny yellow dot appeared, making impressively quick progress in our direction. David, a 67 year-old just-retired doctor from Hamilton caught up to us while we marvelled at the clarity of the air from Girdlestone. We could easily see Tapuae-o-Uenuku, Taranaki, Ruapehu and Ngauruhoe – perhaps the clearest views I’ve ever enjoyed from the Tararua tops. David had slept at Dorset Ridge Hut. We could also clearly see Carkeek Hut from Girdlestone. I haven’t been to either and am doubtful about my levels of motivation to ever do so. Both huts sit at the end of long ridges to nowhere. You can take this hut bagging thing too far. 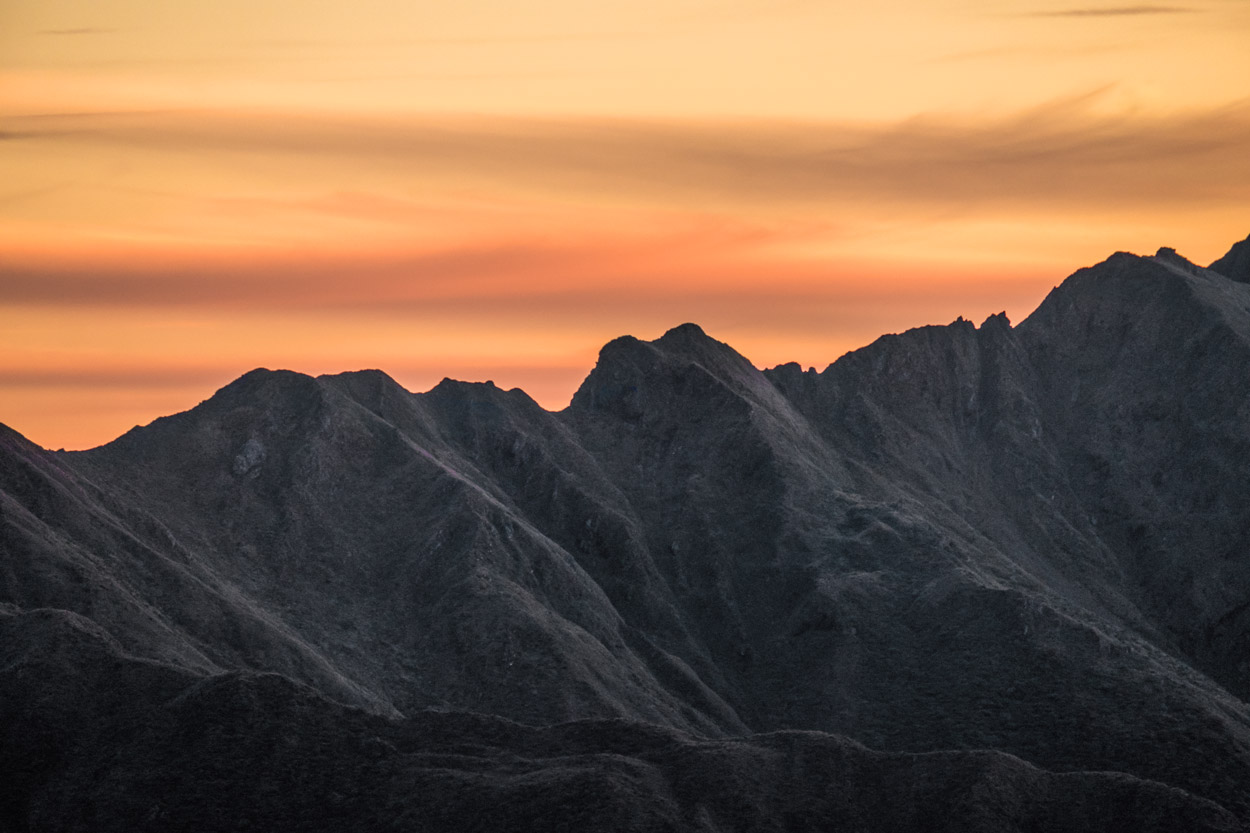 The Broken Axe Pinnacles, viewed from just above Tarn Ridge Hut, sunset
Anyone who has dropped down the south side of Girdlestone will know that it’s quite a steep and craggy trail, no problem in the conditions we enjoyed, but likely formidable in icy winter conditions. I’ve been this way before, but was taken aback when we reached North King. It’s southern aspect seemed more intimidating than Girdlestone’s, and was perhaps even up there with the Waiohine Pinnacles. With the Broken Axe Pinnacles still ahead of us, I pondered whether or not I was getting a tad soft. We bid farewell to David at Mid King, where he headed down ridge to Mitre Flats. Four hours after departing Tarn Ridge Hut we reached South King and, though the tiny white dot of Jumbo Hut still looked a very long way away, we felt that we still had plenty of time to go that way, rather than shorten our route down Baldy Ridge. Caro was aiming to be at the pick-up point at 7pm. ‘So, time for the Broken Axe Pinnacles then eh Simon.’ I’d been this way, but in the opposite direction alone in winter conditions before. Then I opted for the low trail on the southern side of the Pinnacles, and even that required use of my ice axe to stay in touch with the steep tussocky, vegetated traverse. As Simon and I neared the crux fin it didn’t exactly look inviting, even in perfect conditions. Then two fit young guys appeared in hill runners, coming at pace beyond the crux. ‘So how was the crux?’ I asked. ‘I’ve done it in the past, so I opted for a calm heartbeat this time via the nice DOC detour to the right. But my mate went over okay.’ His mate gave us the run down and wished us well.
Moments later we stood at the base of the crux. ‘I reckon we COULD do it,’ I said ‘but if we DID fall it would NOT be pretty. That final sheer, unvegetated section at the top is sending me a back-off signal.’ Simon agreed. ‘Yeah, it’s not as if we HAVE to do it, the detour is there for a reason eh.’ So we went left, not up. The detour led around to the other end of the crux fin, then the rest of the trail went over the remaining pinnacles – enough fun for these two trampers.  By mid afternoon we stood on McGregor, our seventh fifteen-hundreder. Angle Knob, our eighth, was not far off to the south. Now the southerly had all but died away and it was hot. The views in all directions remained beautiful, but we were starting to get that ‘give me a cold beer’ feeling. Down at Jumbo Hut there was plenty of cold water, but also a hoard of teenagers lying about looking at their smart phones, so we didn’t pause there for long. Simon is a sixty-year-old whippet, so with the end in sight, he shot off ahead of me as we set off from Atiwhakatu Hut. I reached the road-end after 11 hours on the move, just as Caro drove in to the carpark. Life was good.                 For more captioned images and a route map  https://www.occasionalclimber.co.nz/browse-images-2/new-zealand-north-island/tararuas-browse/northern-crossing-tararua-ranges/ 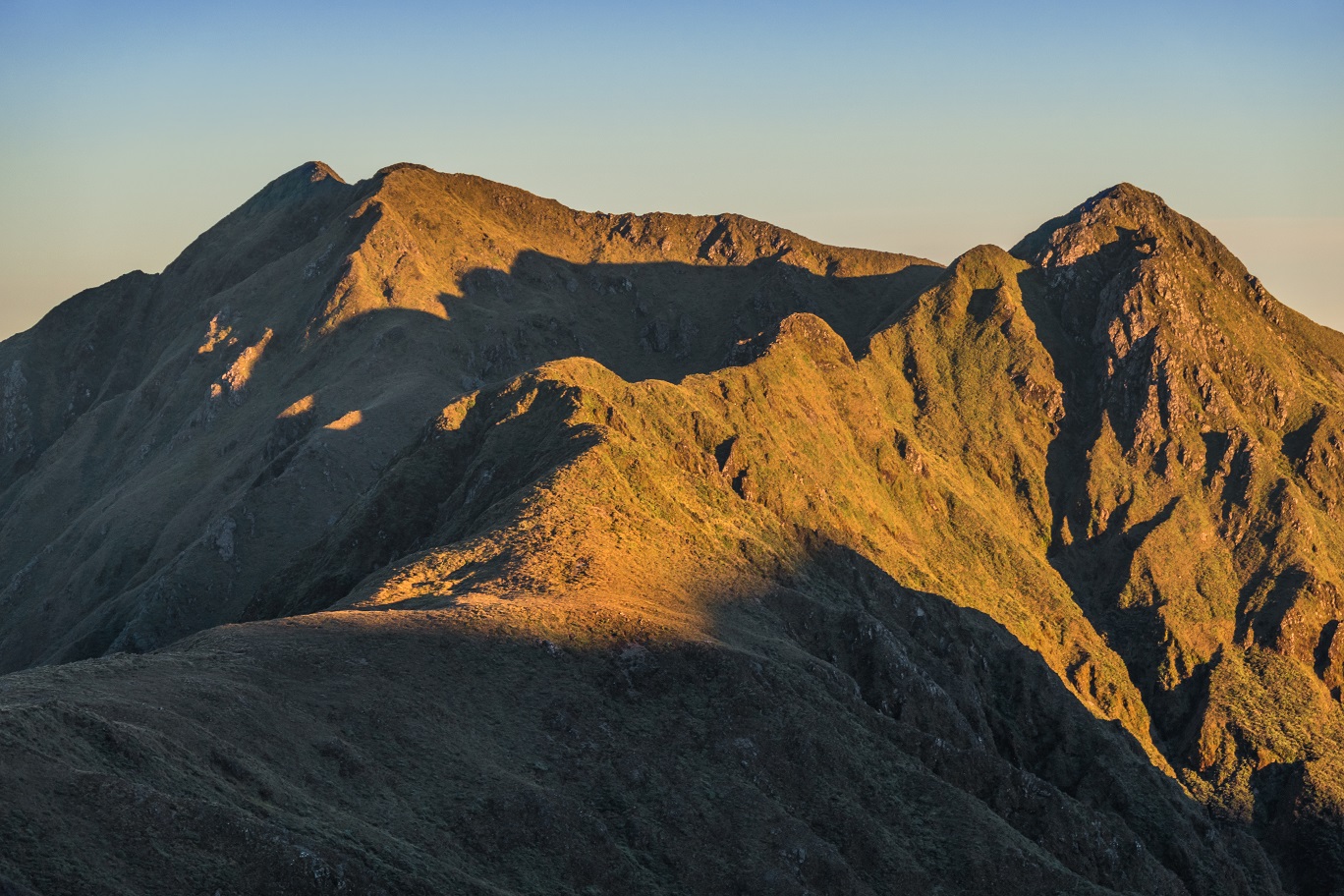 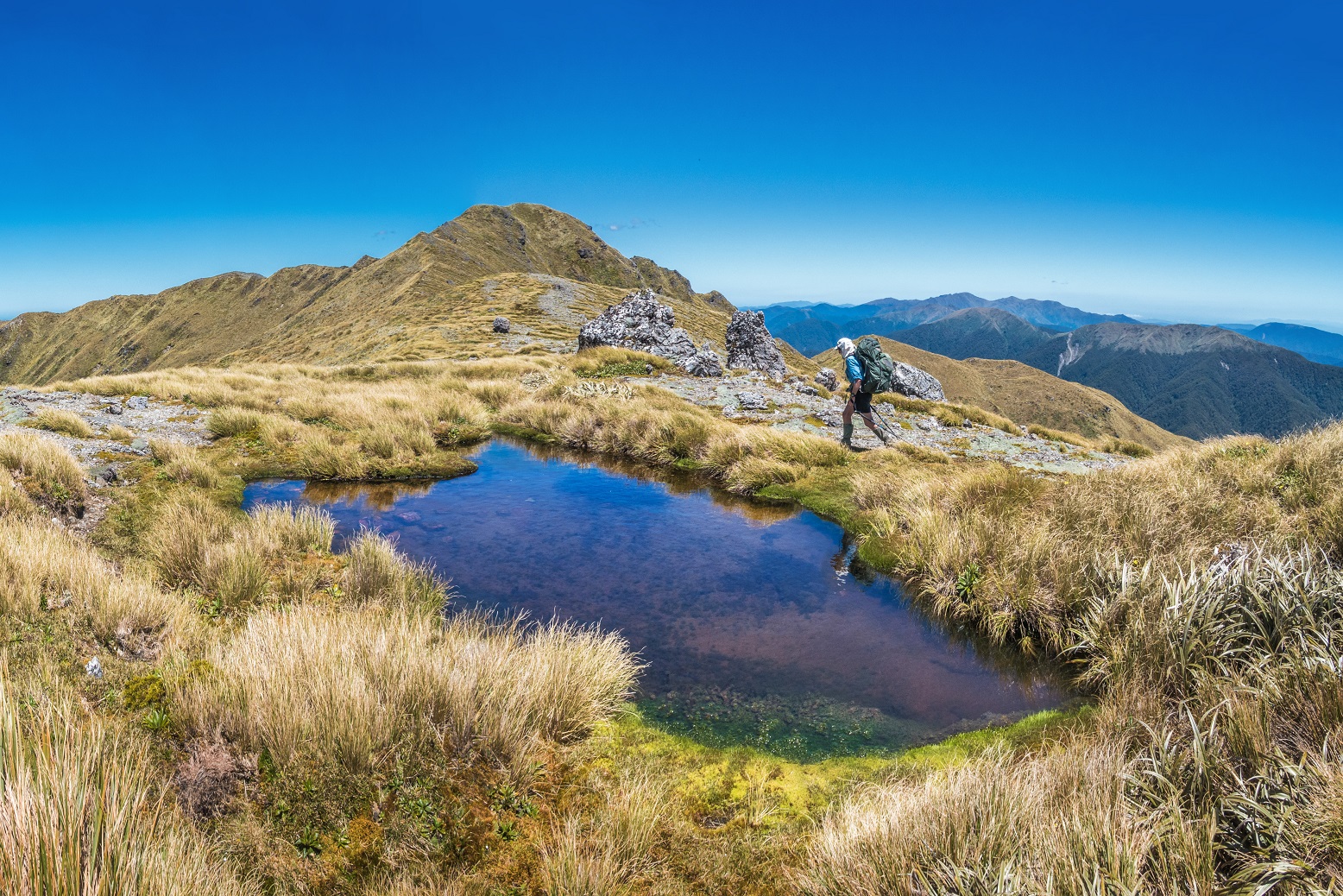 A tarn north of Angle Knob 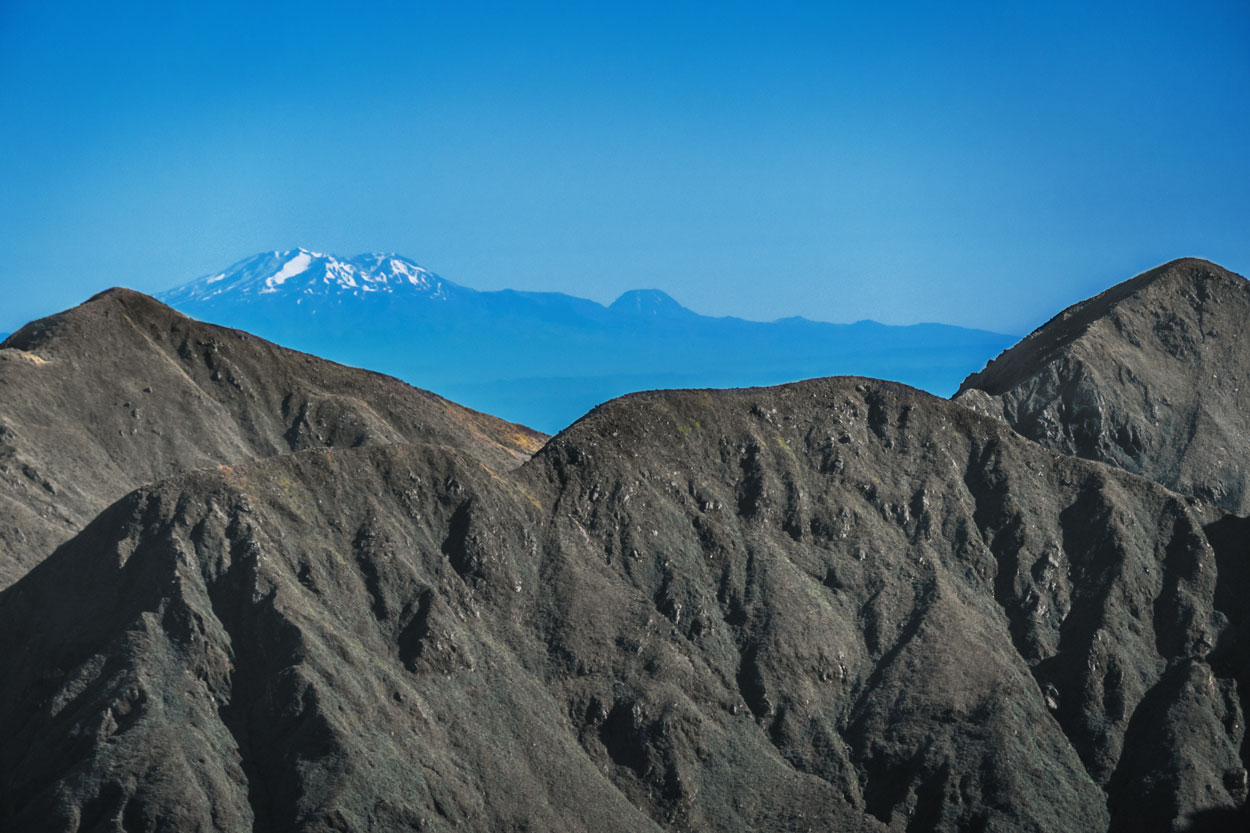 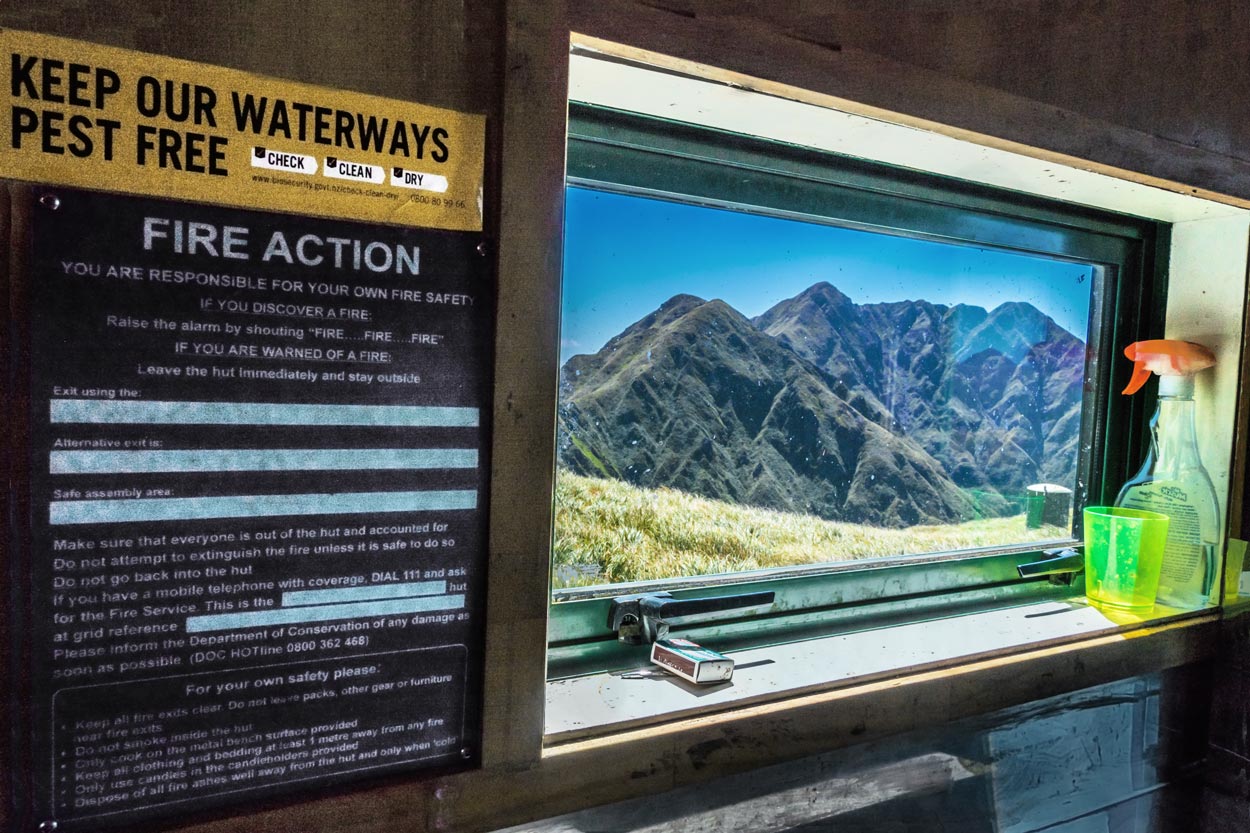 The Twins and Bannister, from Arete Biv 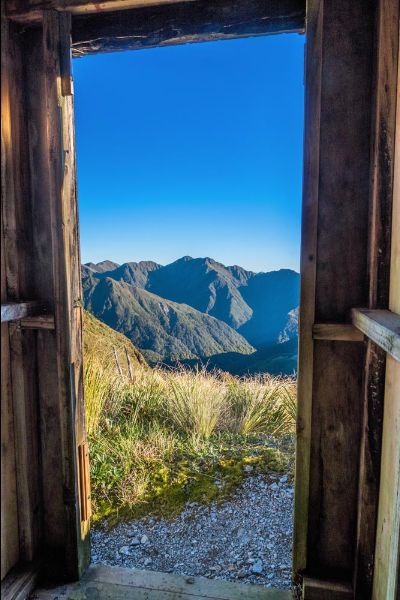 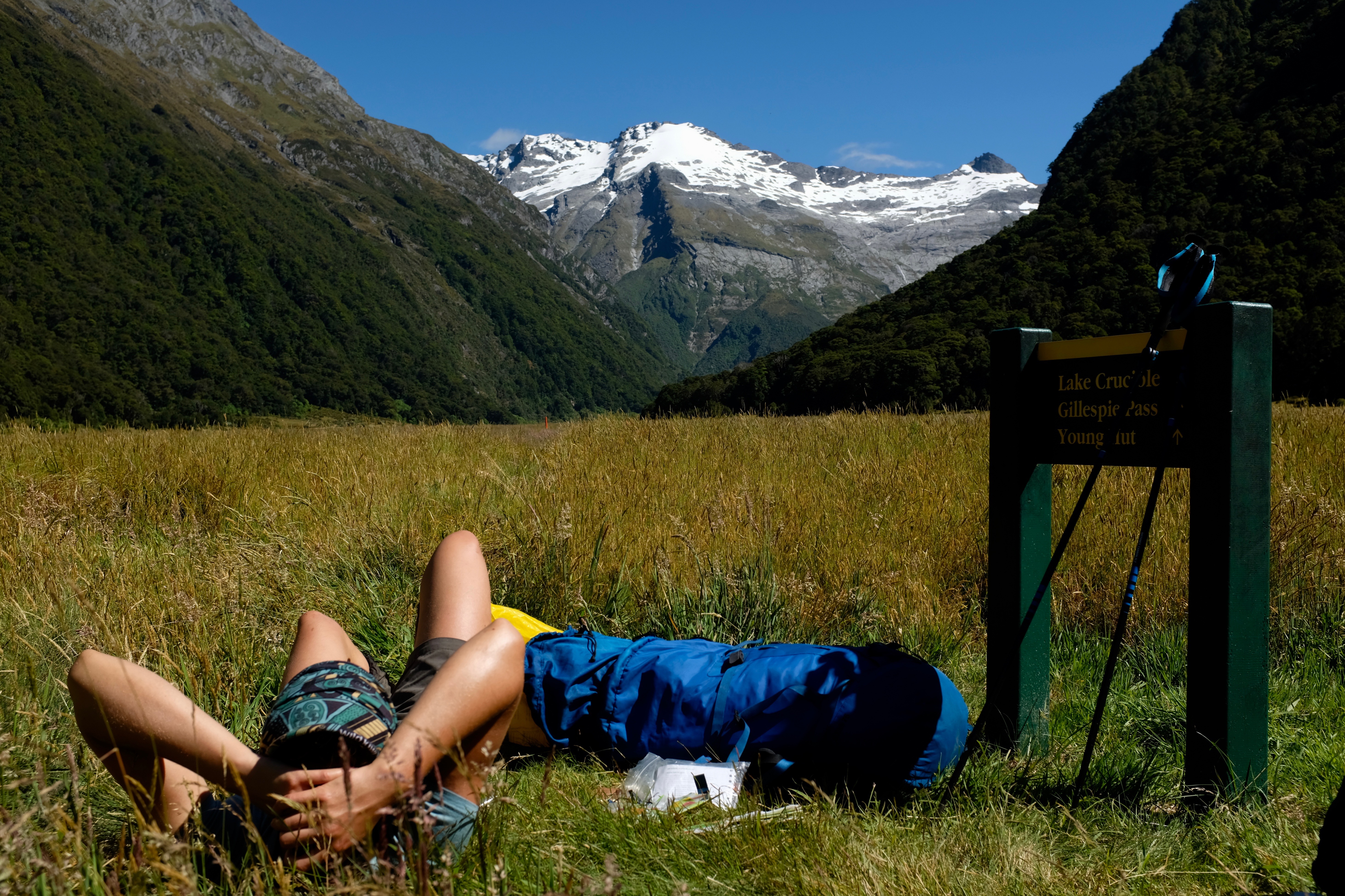 Taking a rest before tackling the steep climb to Gillespies Pass 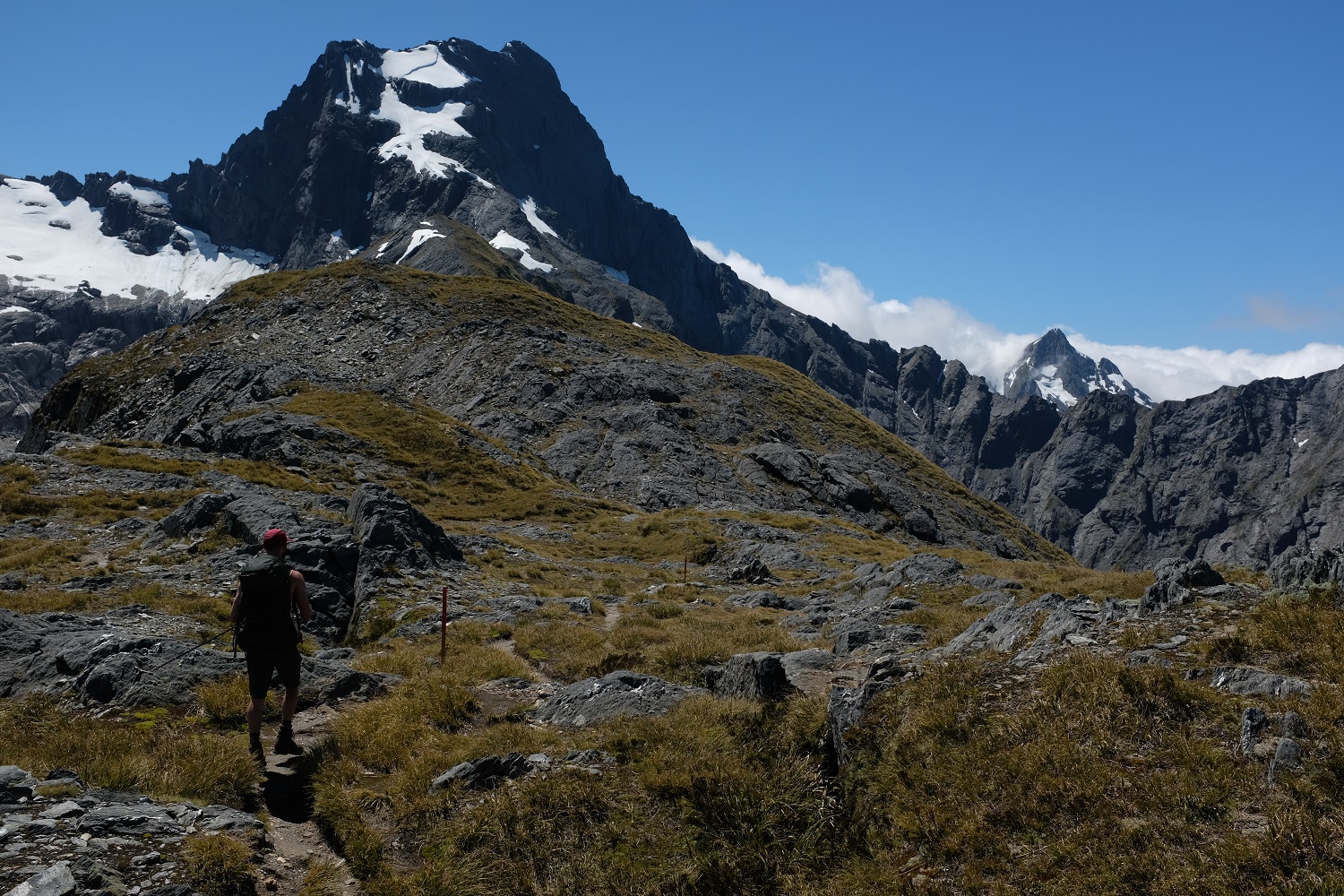 Gillespies Pass with Mt Awful in the background 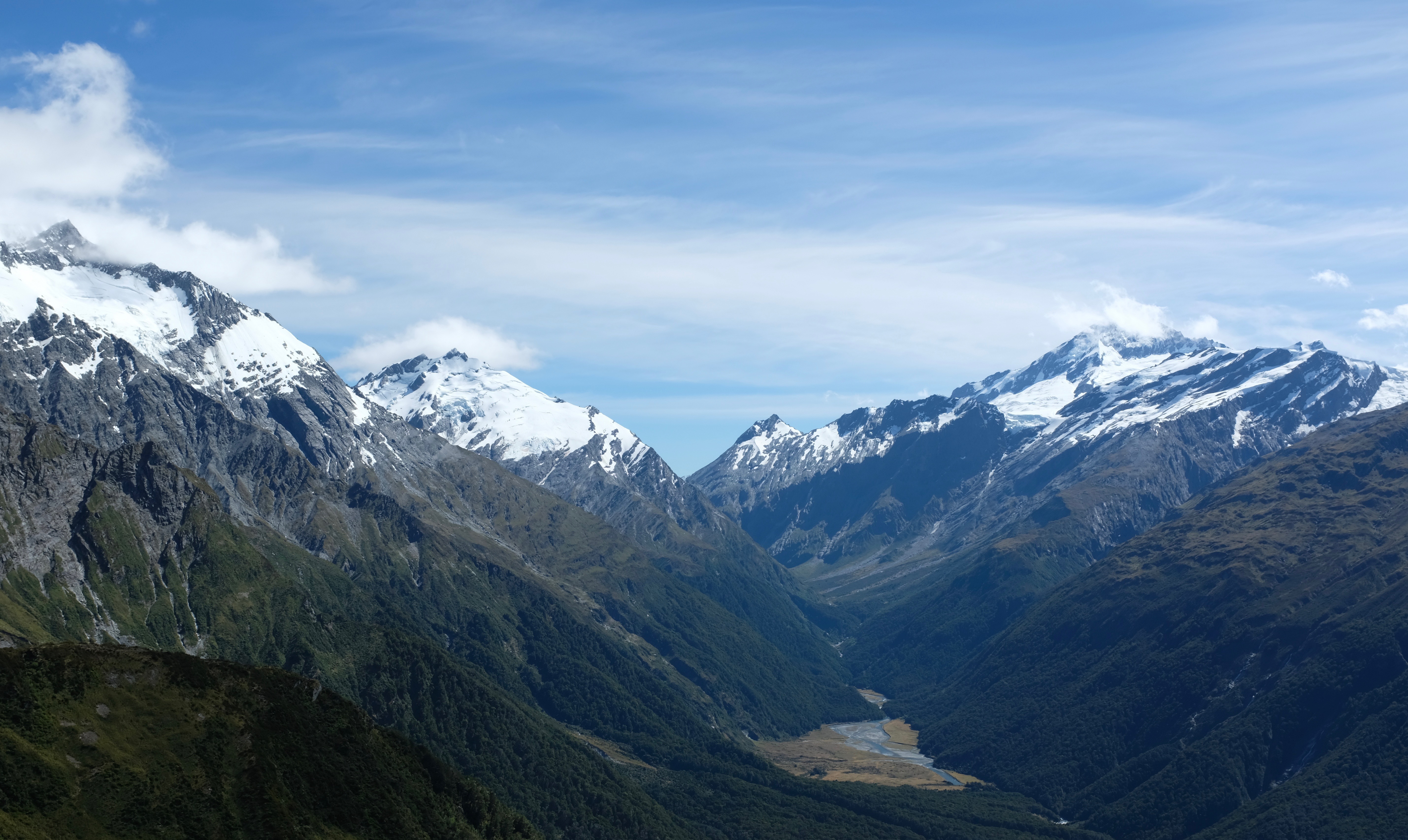 Climbing up to Cascade Saddle with Mt Liverpool, Mt Barff Mt Aspiring in the distance 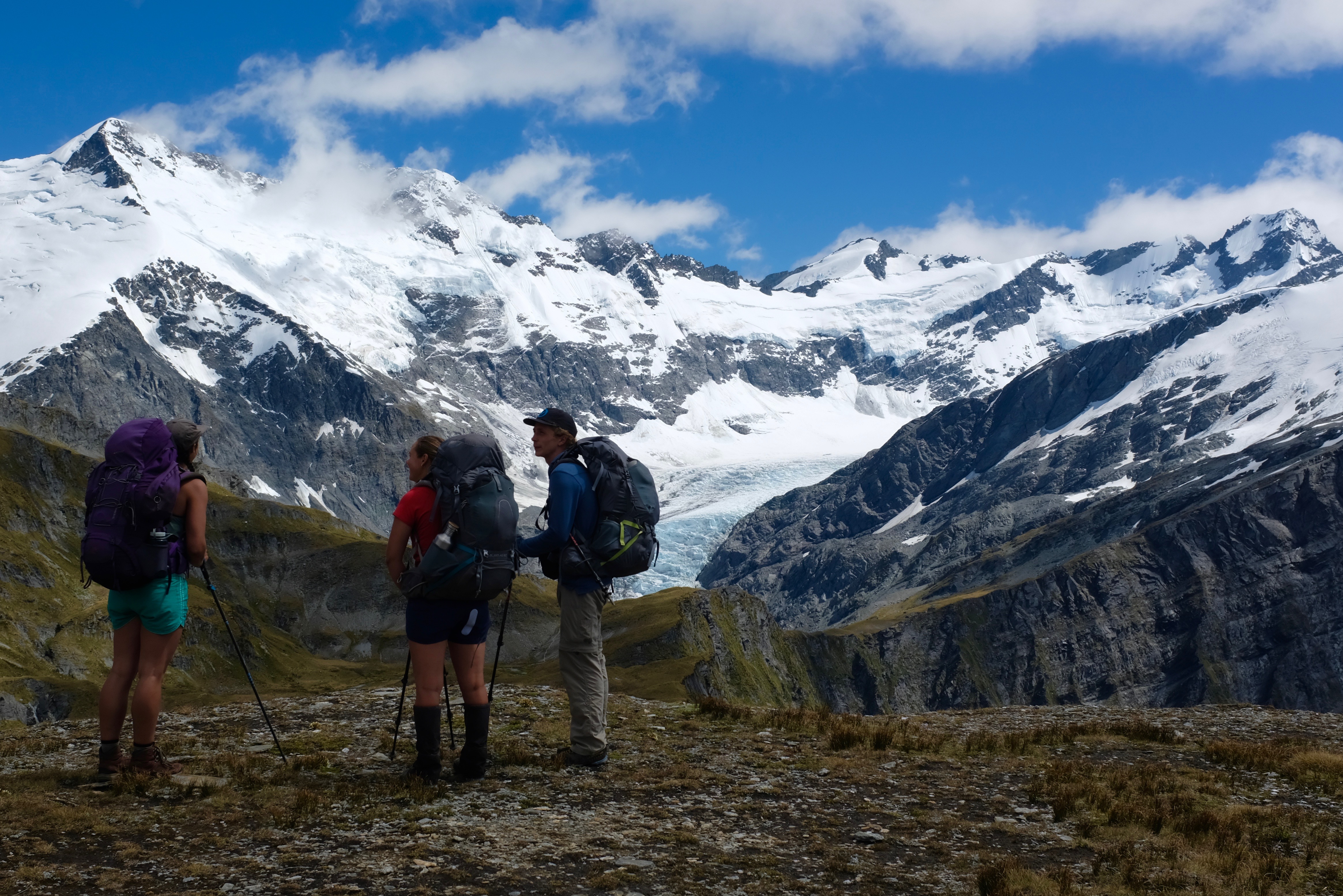 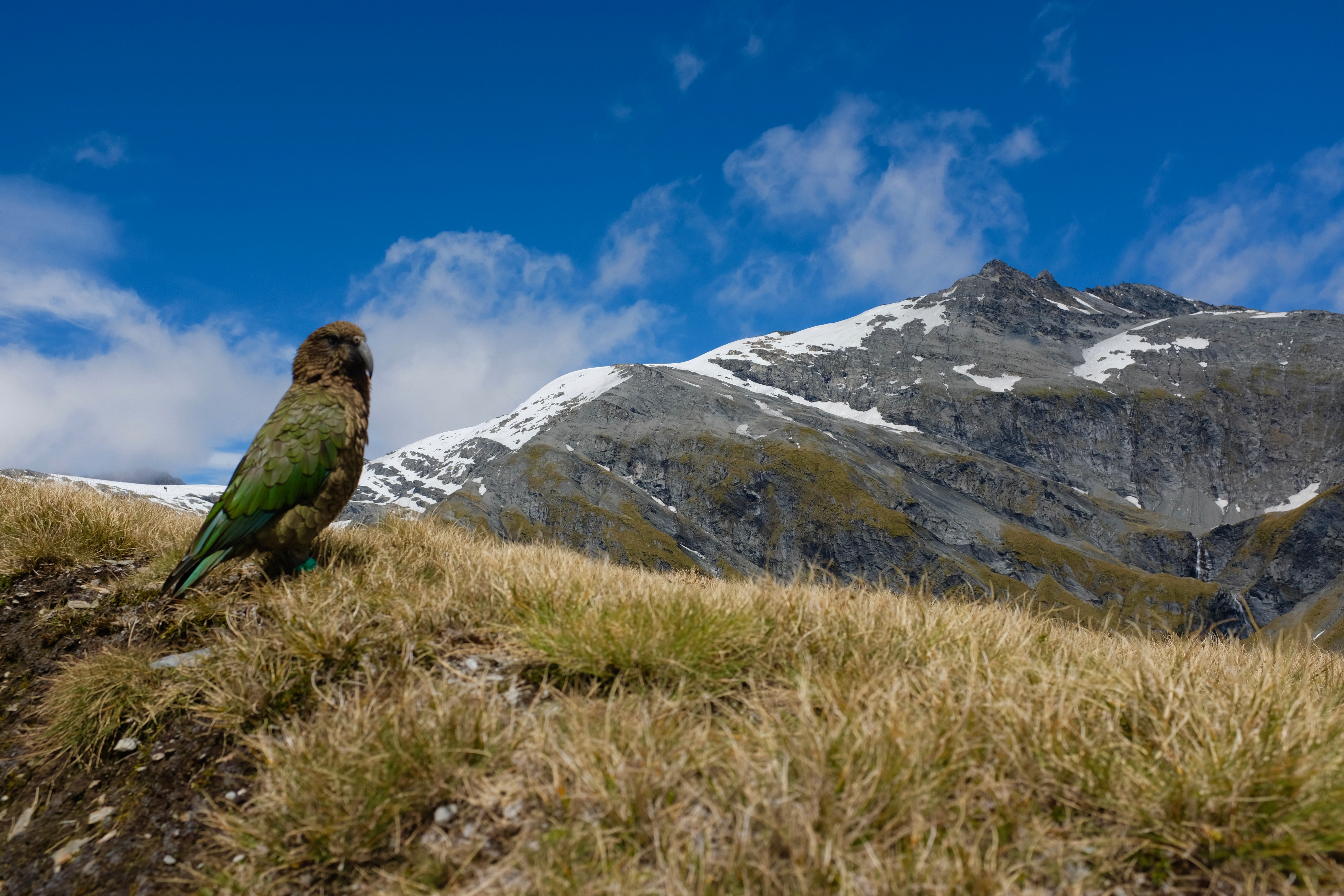 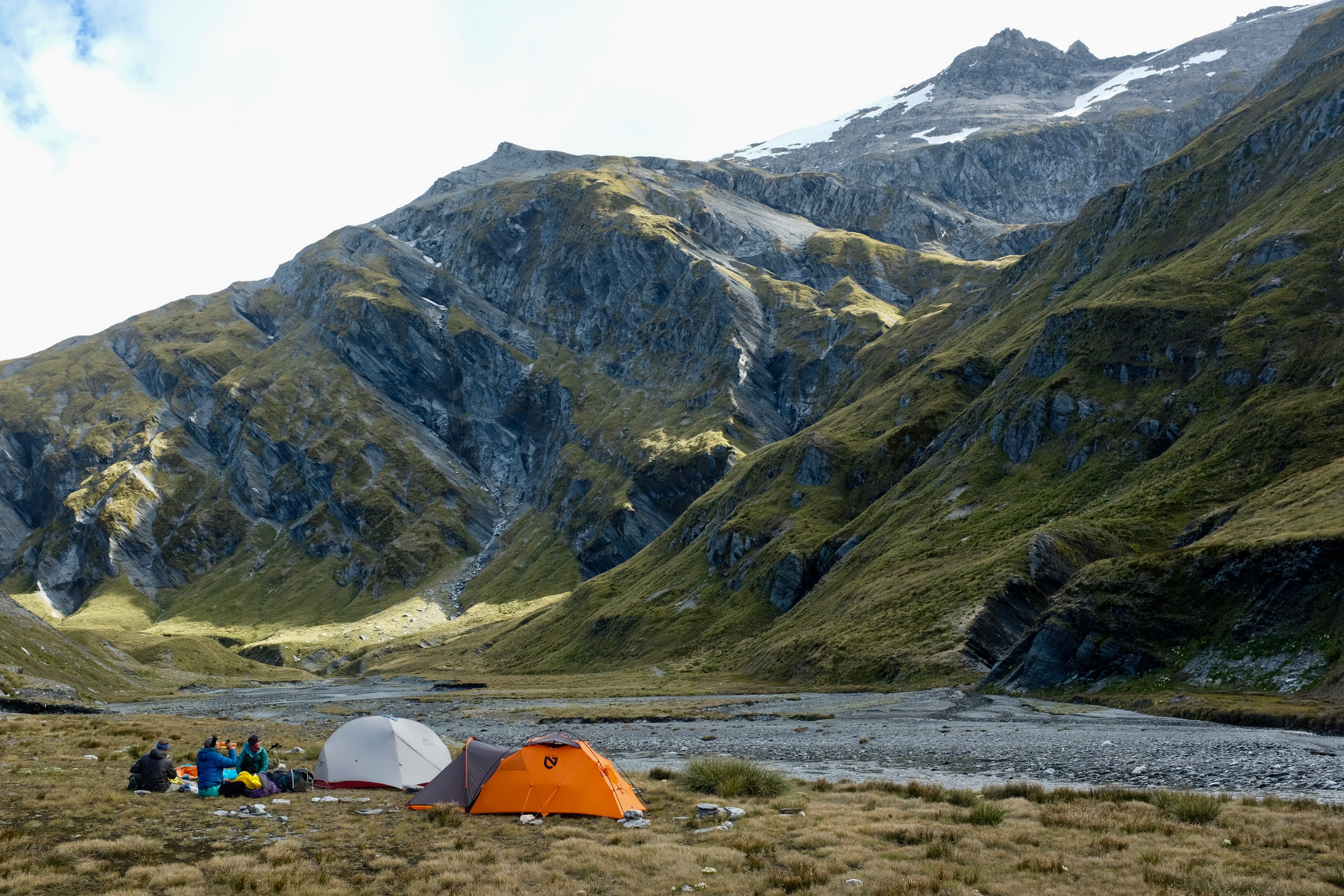 Camping at Cascade Creek with Mt Ansted in the background (before the Kea destroyed my tent). 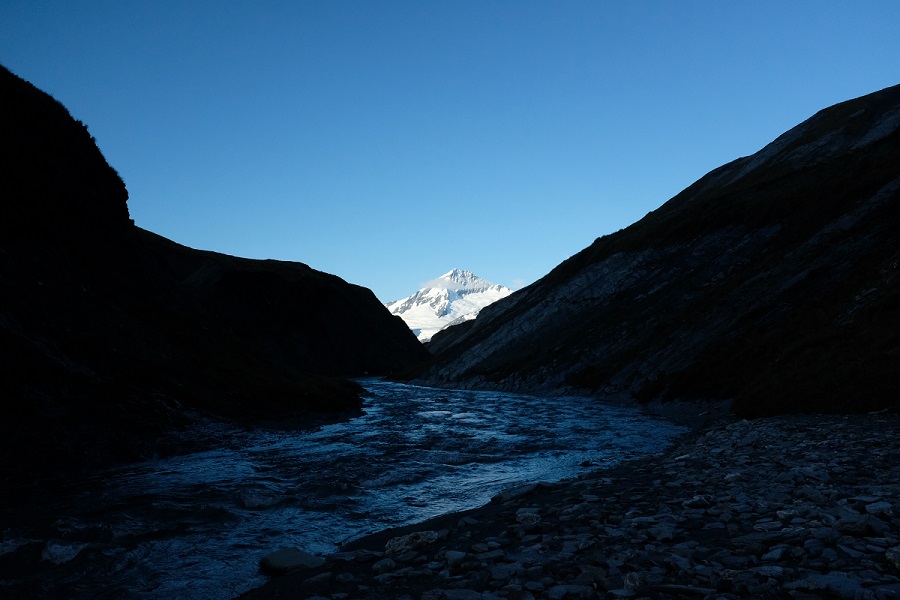 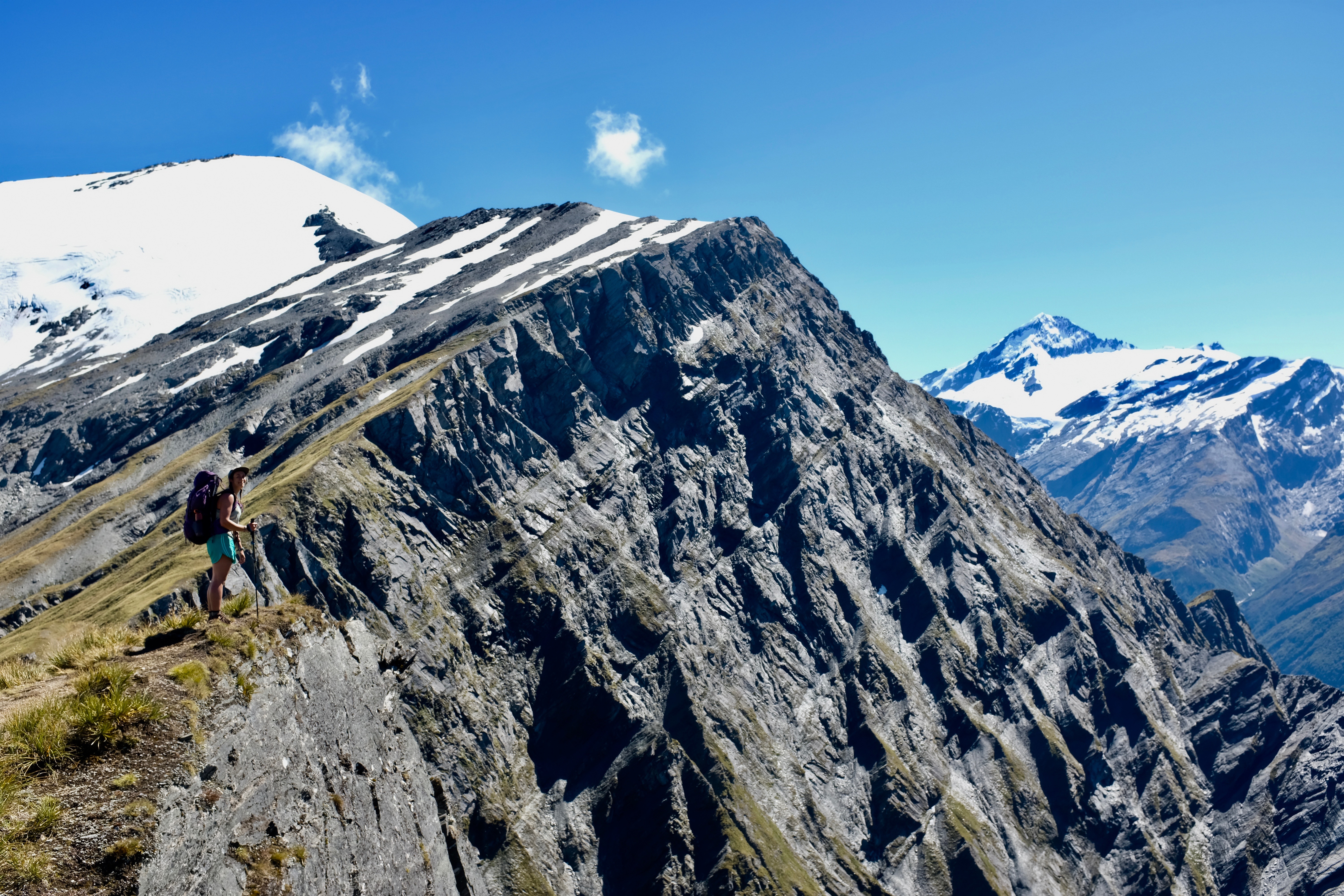 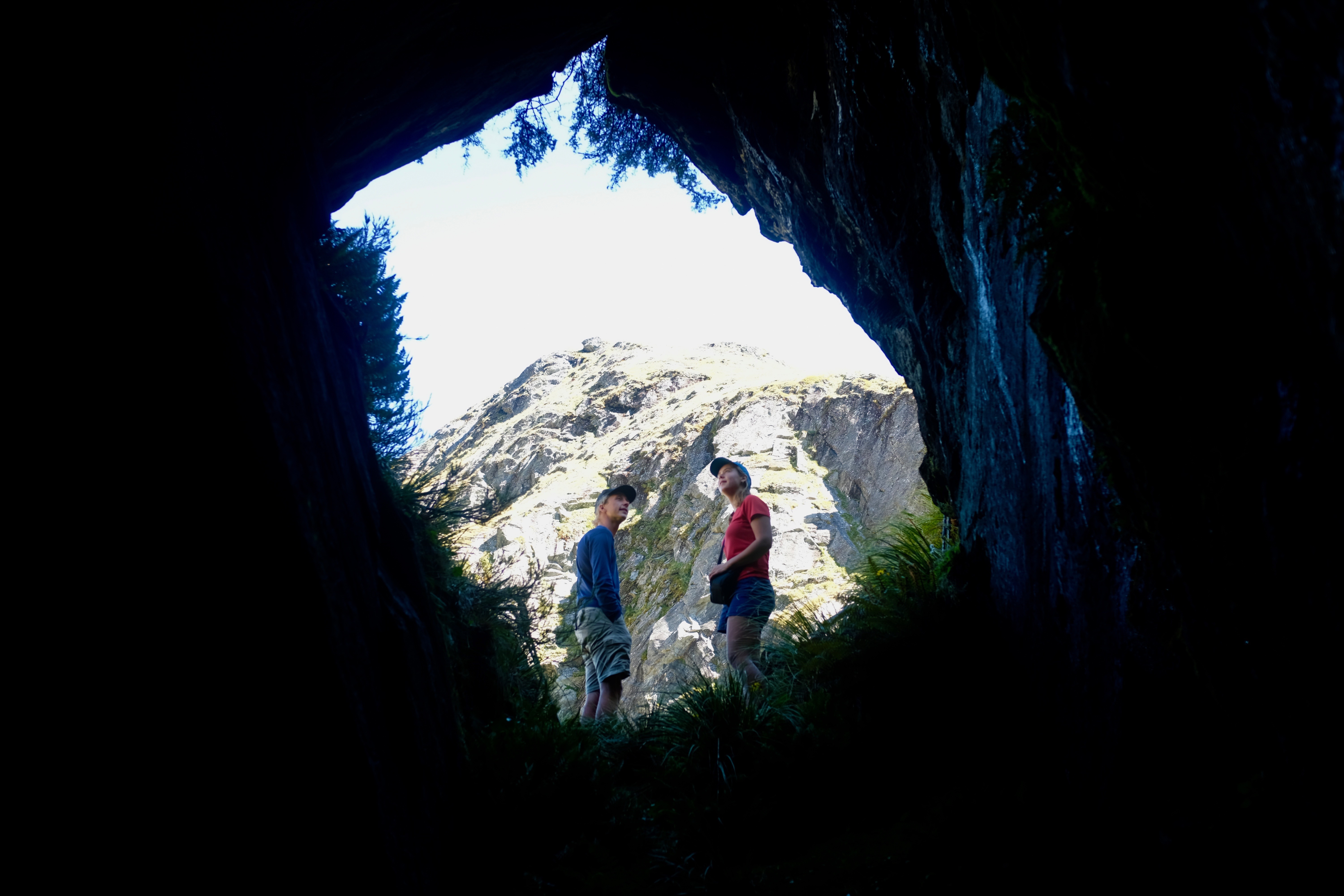 Exploring a cave near the Rees Saddle 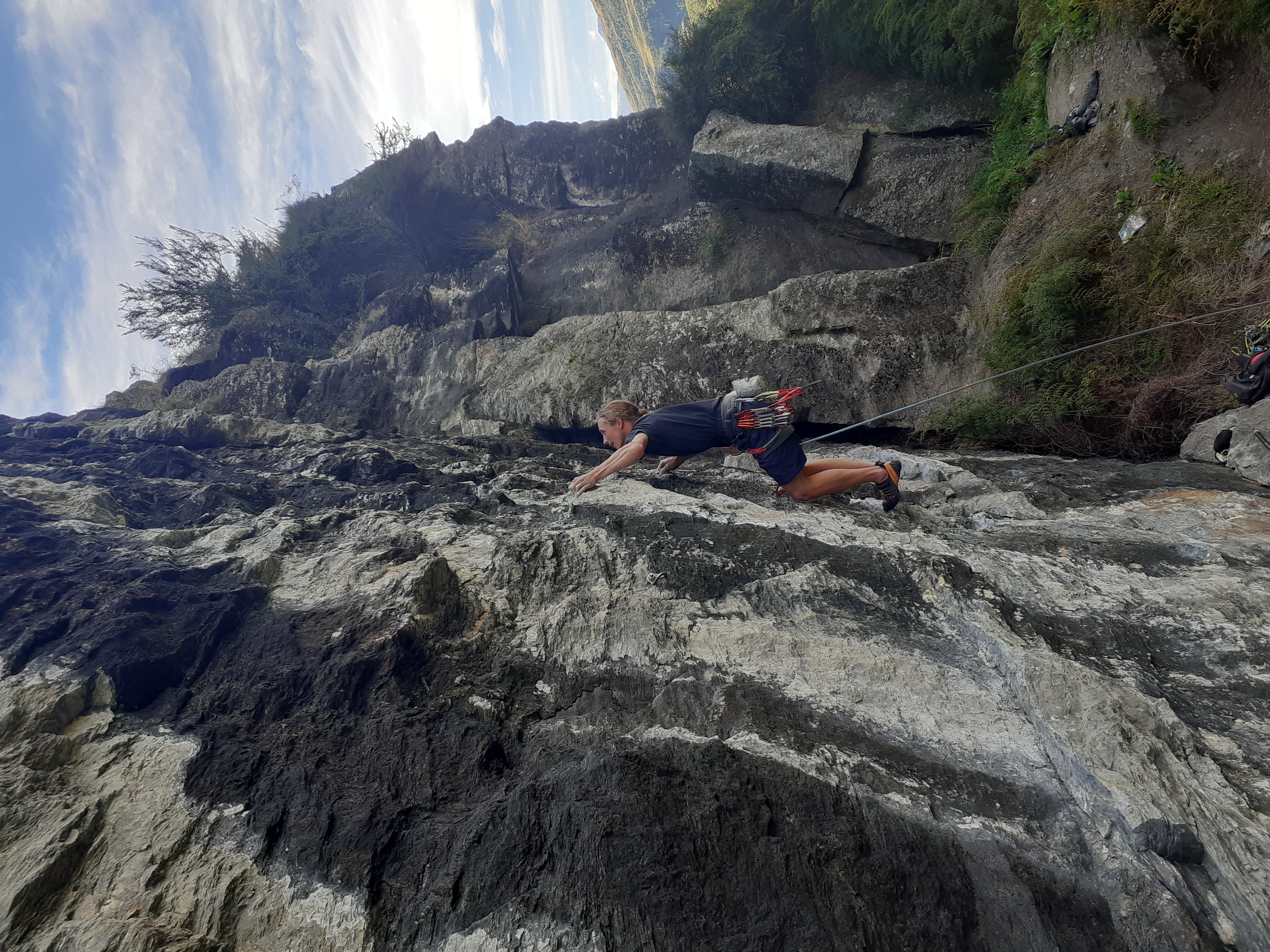 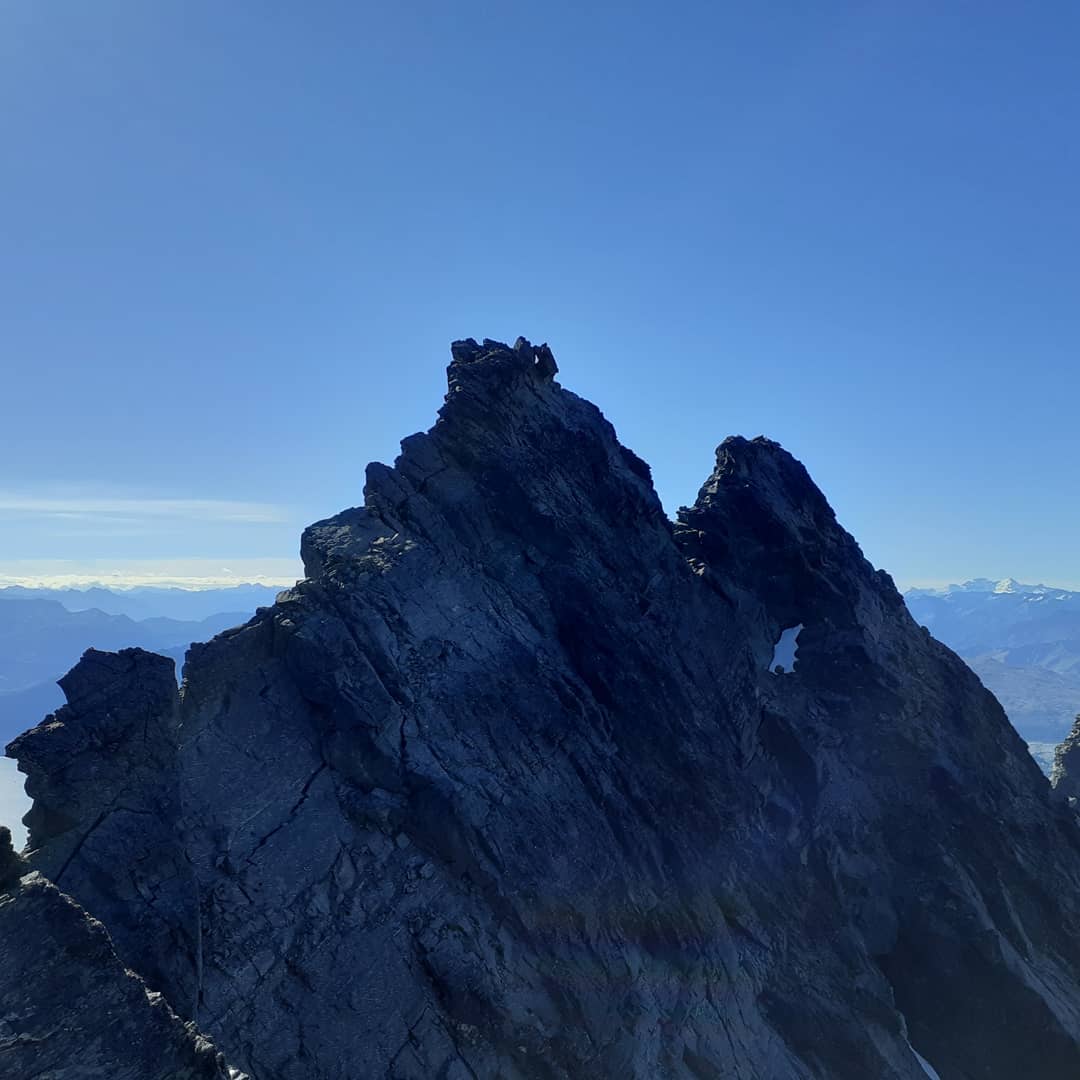 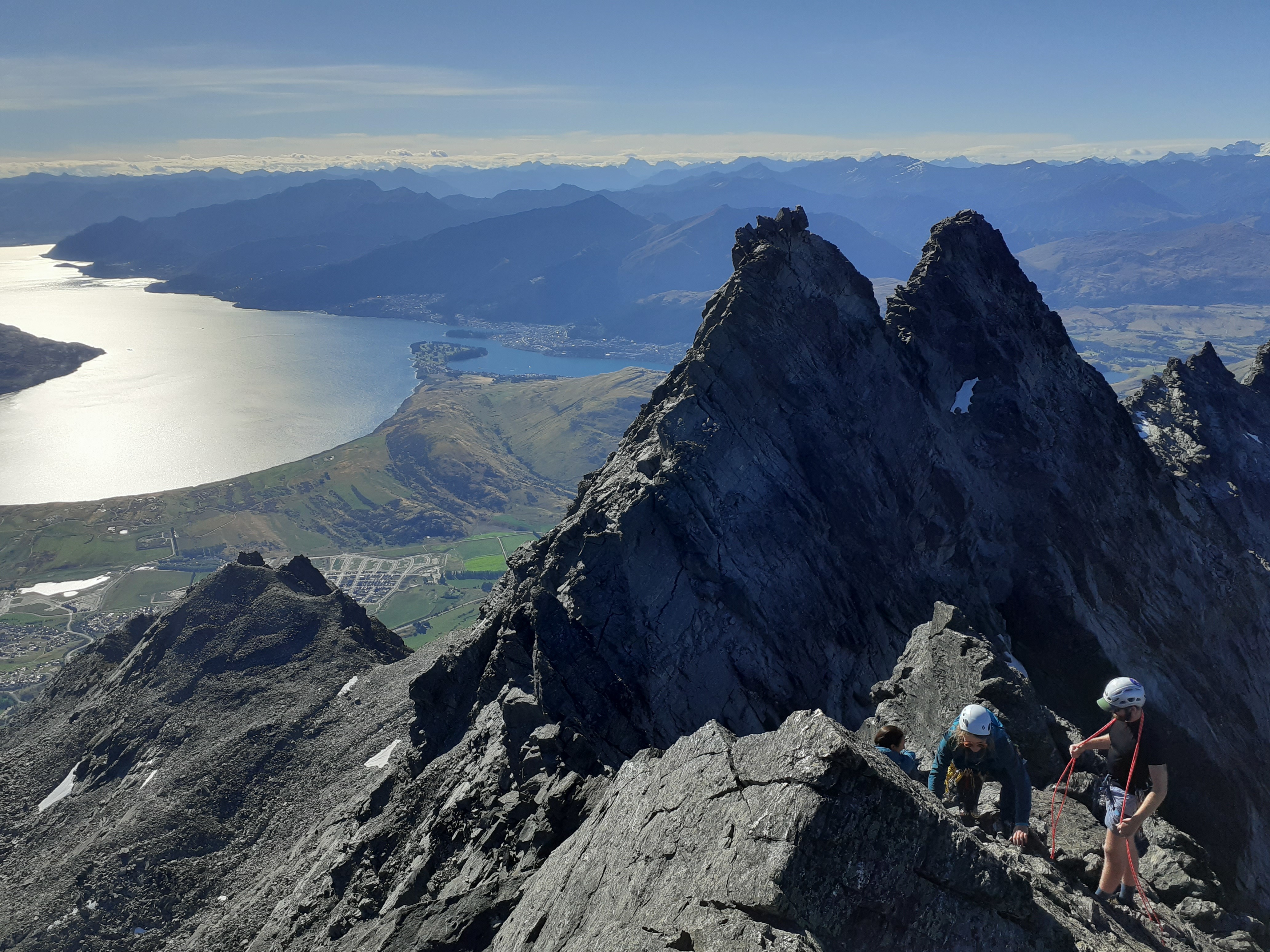